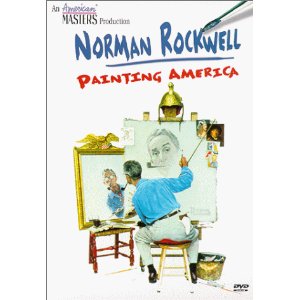 This PBS program honors Rockwell for his contributions to American culture and the art world at large. Includes rare footage of Rockwell at work and interviews with fellow artists and his daughter. Features some of his most famous and inspirational work from the Norman Rockwell Museum in Stockbridge, Massachusetts. ~ Laura Mahnken, Rovi

A presentation of the award-winning PBS series American Masters, Norman Rockwell: Painting America etches a warm and indelible portrait of one of America’s most beloved artists. Insightful commentary by art experts and historians enhances one’s appreciation of Rockwell’s deceptively simple work. To look at Rockwell’s paintings, one observer notes, is to enter “a mythical land of childhood innocence and exuberance.” Director Steven Spielberg, who paid homage to a Rockwell tableau in his filmEmpire of the Sun, adds, “He dealt with every touchstone in life and made a meal out of it…. He captured us in the blink of an artistic eye.”

Norman Rockwell: Painting America traces the artist’s life and career. One might be surprised, for example, that Rockwell was not born and raised in a small town but in cosmopolitan New York City. We also get a privileged look inside Rockwell’s studio for a glimpse into how he created his masterworks. One of his daughters relates an anecdote with the same impish smile her father so wonderfully captured in a famous painting depicting a disheveled schoolgirl sitting outside the principal’s office, the victor in a playground tussle with a boy.

Rockwell’s paintings captured the way we were and how we should be. His legacy and spirit can be seen, for example, in Frank Capra’s It’s a Wonderful Life. “He told us we were good,” one historian states. Seen in a Person to Person broadcast with host Edward R. Murrow, Rockwell himself remarks, “I paint life as I would like it to be.” –Donald Liebenson