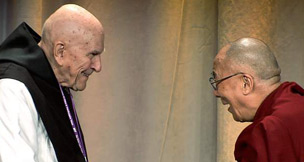 Keating’s own journey toward a very personal relationship with God led him to develop a method of “centering prayer” — a form of meditation or contemplation within the Christian tradition. Over the past thirty years, the practice has spread through its network organization, Contemplative outreach. From its humble beginnings in a New Jersey garage, Contemplative Outreach now draws people from many countries, many Christian denominations, and from many faiths — a very grassroots story of spiritual yearning. Keating has said: “We are surfing the wave of a felt need. What we call God is really about the transformation of the whole human race.”

The personal, internal story of Keating’s exploration of faith is juxtaposed with the outward and future-looking movement that his journey has spawned.

The  program was honored with the Aspen Film Festival AUDIENCE SPECIAL RECOGNITION FOR DOCUMENTARY 2014.

“….an effective introduction to its subject’s unique approach to spirituality.” — THE HOLLYWOOD REPORTER

“In this elegant and enlightening film directed by Elena Mannes and Peter C. Jones, Fr. Thomas’ deep devotion, wisdom, tenderness, vulnerability, and charisma come to the fore.” — SPIRITUALITY AND PRACTICE

“Filmmakers Elena Mannes and Peter C. Jones are attentive to the beauty and discipline of meditative devotion, ” — THE LOS ANGELES TIMES

“Keating does not merely appreciate God, humanity, creation, science and nature but folds all of creation and reality, divine and earthly, into a zone for silence that is beyond even contemplation.” – NATIONAL CATHOLIC REPORTER